Eli had his fourth birthday a couple weeks ago and I thought I’d share what we did. It really was a pretty relaxed party. At our house the kids are allowed to invite as many kids as how old they are turning. So Eli was supposed to invite 4. And him being the wheeler and dealer that he is, he worked that into more kids. First he told me who he wanted. Then he kept saying that he wanted the moms to come too. Then he added in the other siblings. And then the morning of he was like WAIT why isn’t Talan here (he lives across the street) so he ran over there and invited him to come over too. (And his mom ran to the store and bought Elie a present. So really Eli worked it to have way more than the allotted 4 kids to his fourth birthday. And really, that is soooooo Eli.

I made all the kids “capes” in the cutting of the men’s t-shirts. It worked great and I made 12 in about 10 minutes. Perfect 🙂 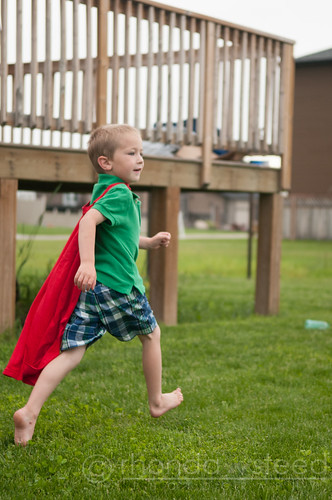 Anyways, on to the picture overload. We made an obstacle course in the backyard. Really I think I do one at every boys party. 🙂 SO this one I tried to think of super heroes and the things they “do”.

First they ran through “flames” and weren’t supposed to let the flames touch them. (the blowing wind sure helped them out on that!) 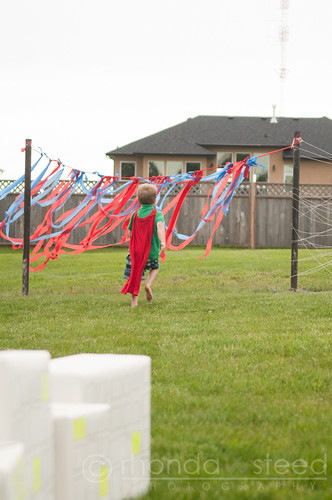 Then the had to climb through two different spider webs that Alden made. (It sure was good they had started our fence but just had the poles so we could use them!) 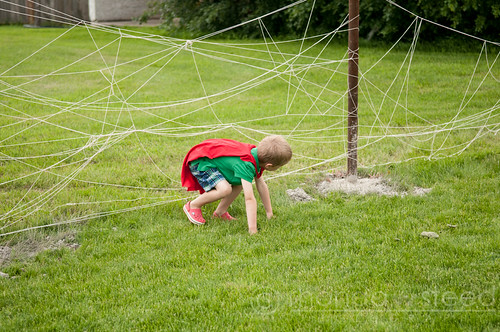 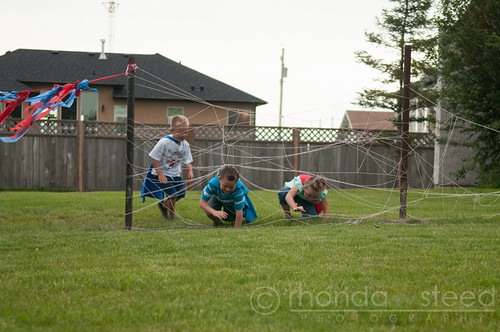 Then run to the trampoline to jump from one side to the other without hitting the bombs (balls) that were on it. 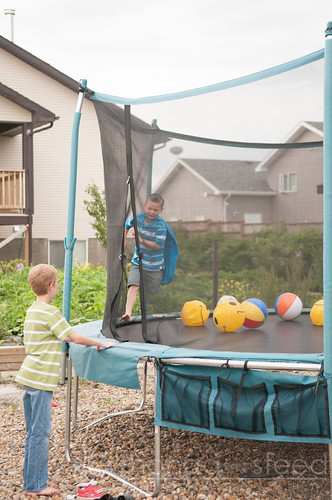 Then on to jump over the buildings 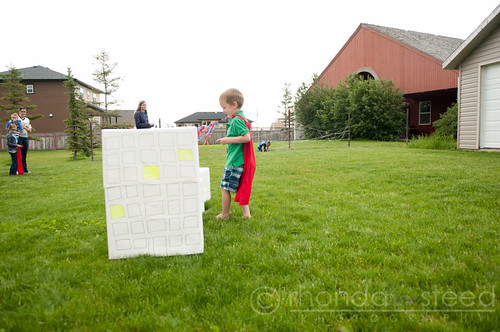 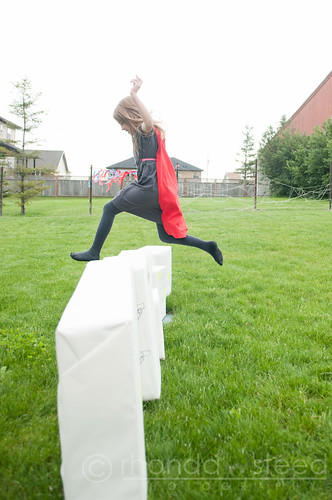 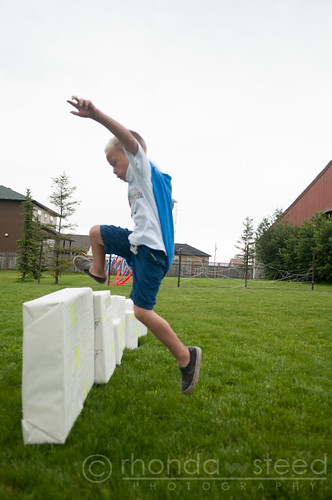 Then on to Target practice. 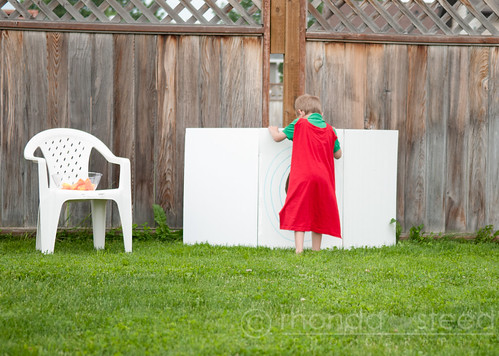 Then a “super break”. 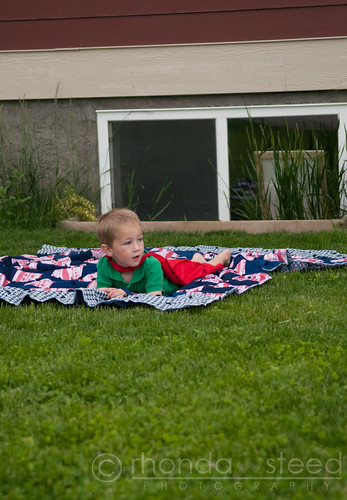 And they could do the course over and over. Which they did. 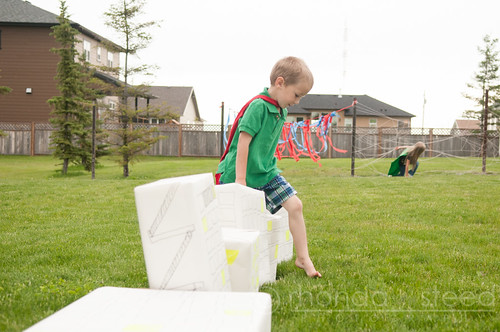 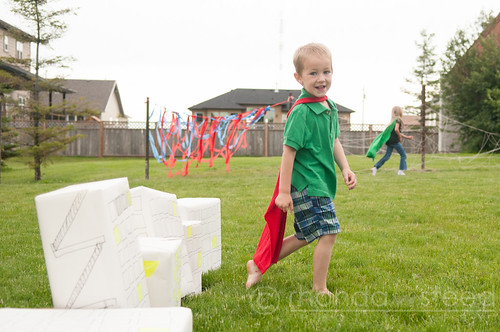 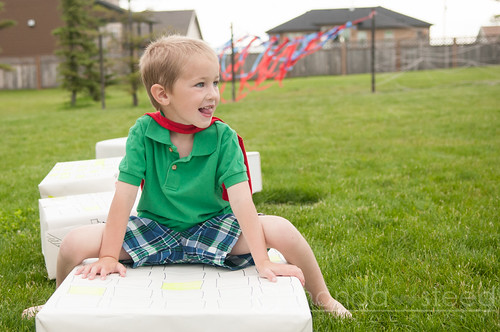 For the food we did Eli’s very favorite thing in the world. Cereal. I bought a bunch of sweetened cereals that I never let them eat. And had milk and juice boxes. 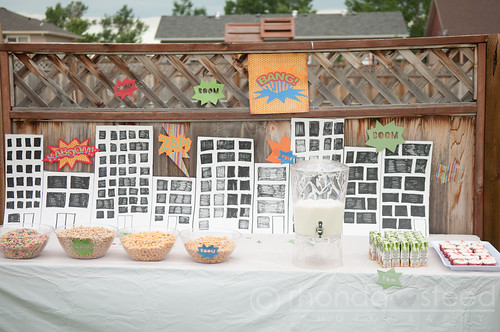 I cut a bunch of super hero phrases out on my Silhouette Cameo and made the “city” backdrop out of poster board from the dollar store. 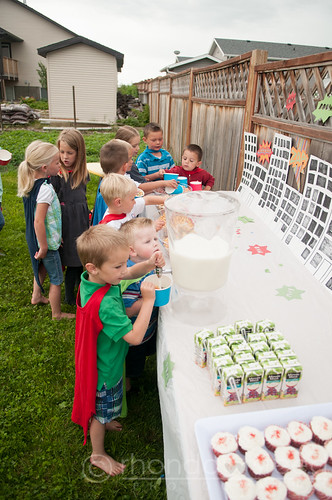 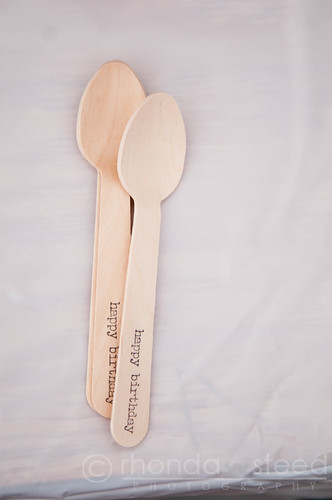 Eli having a cupcake. I should say blowing out the candles. Cause all he does is lick the icing. Four for four he has never eaten his birthday cake. So this year I got smart and made some yummy banana cupcakes with Vanilla Bean Cream Cheese Icing. It was totally cause I knew moms would be eating them too. And since Eli never eats his cake, we might as well enjoy them 🙂 HA 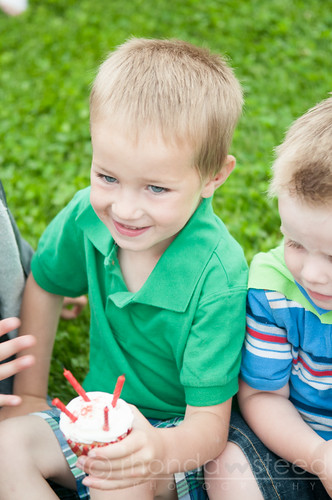 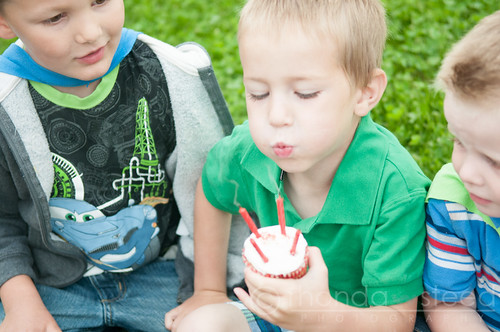 It was lots of fun and really nice that all the mom’s were around to hang out too 🙂 And the best thing is that almost everything we did I just gathered it all and threw it away. Really really fast clean up 🙂