So a few weeks ago I started getting people messaging or sending me links to applications to a reality TV show called the Great Canadian Bake off. 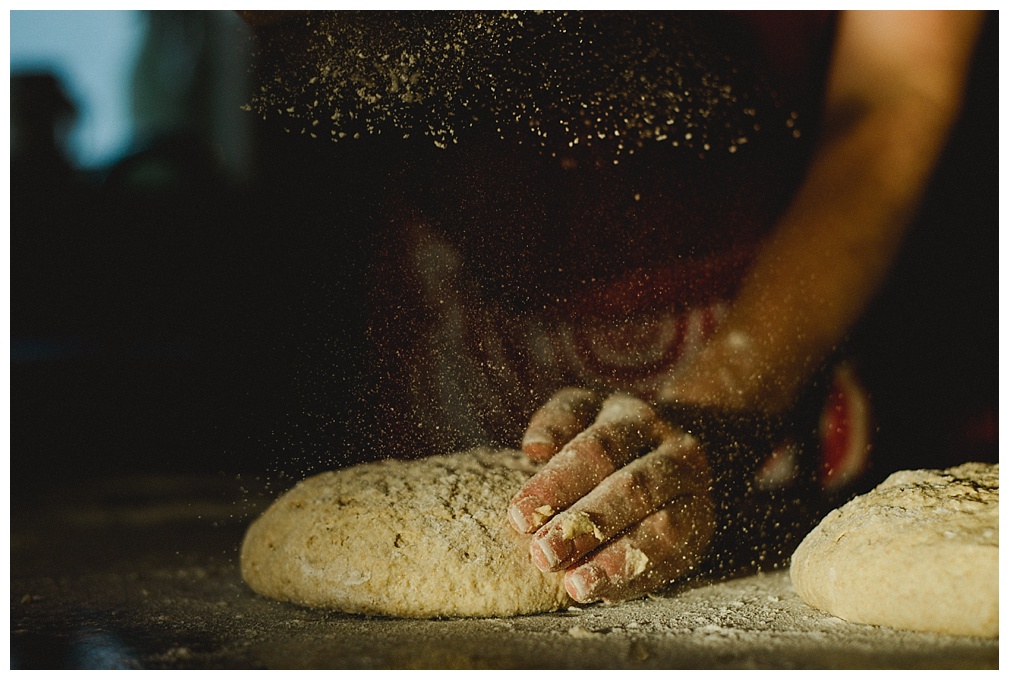 And my first reaction was like uh, no thanks.  I mean i obviously love baking. If you’ve read my site for a while at ALL  or spent any time with me you’d know i love baking a lot. It’s one of the things I do a lot and I’m quite passionate about. I love baking. Well my oldest two kids saw the link and asked me if I was applying and I was like no! why?! And they were both like, oh come on! It’d be so cool. I’ve never seen the show or any of the other ones (British, American, Australian) And they were very excited about it. So one night on a whim I filled out the application. Now I must say I was a tiny bit sarcastic in my application. Like under my signature item I wrote: Bread (everyone is always ragging on gluten but I think it’s marvellous.) HA. So when they called for a phone interview I was a tad bit surprised. And I even told the lady on the phone that. 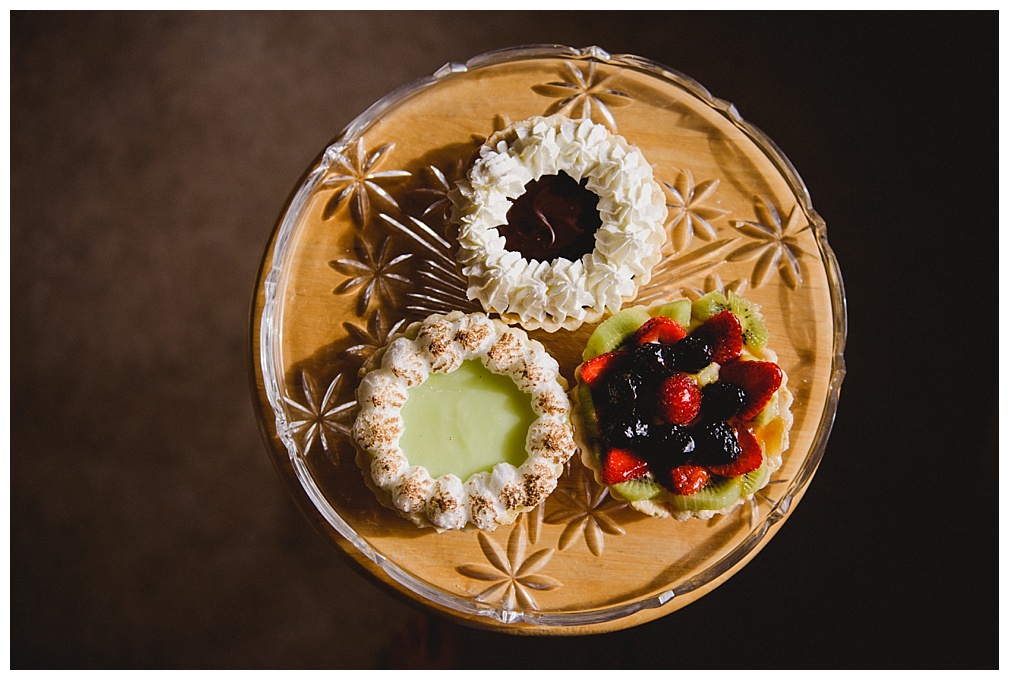 But she told me I had a strong application and asked me lots of baking questions, and then that they’d love to have me come to an in person interview in Calgary. So after getting all that arranged I went. I didn’t know what to make at first. I considered donuts since a lot of people know me for that. And it’s a family tradition but I think they don’t travel well and really I kept coming back to my love of bread. It’s easier to travel to Calgary with and it’s bread! I love bread. And I love baking bread. And I love to talk about bread and eat it and share it. So that decided it for me. 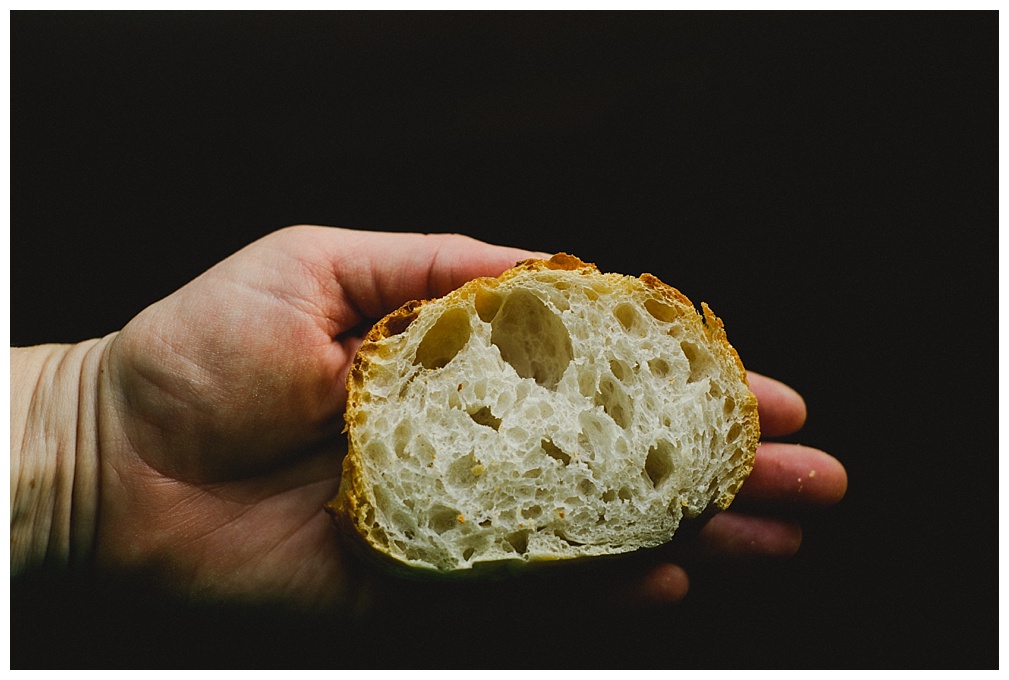 But I love making so many kinds of bread that I couldn’t decide what kind to make either. So on Friday I made a lot to help myself decide. 8 loaves of french bread, 2 different white sour doughs (from two different starters), a whole wheat sour dough, two braided cinnamon raisin breads, 2 boules, and 1 batard. I made a couple at least of each kind for one to try and maybe one to take. But ended up putting one formed sour dough in the fridge and getting up at 6 with my kids and baking it in the morning before I went. This is a picture of my loaf I ended up taking. Along with some sharp cheese and balsamic vinegar + oil. 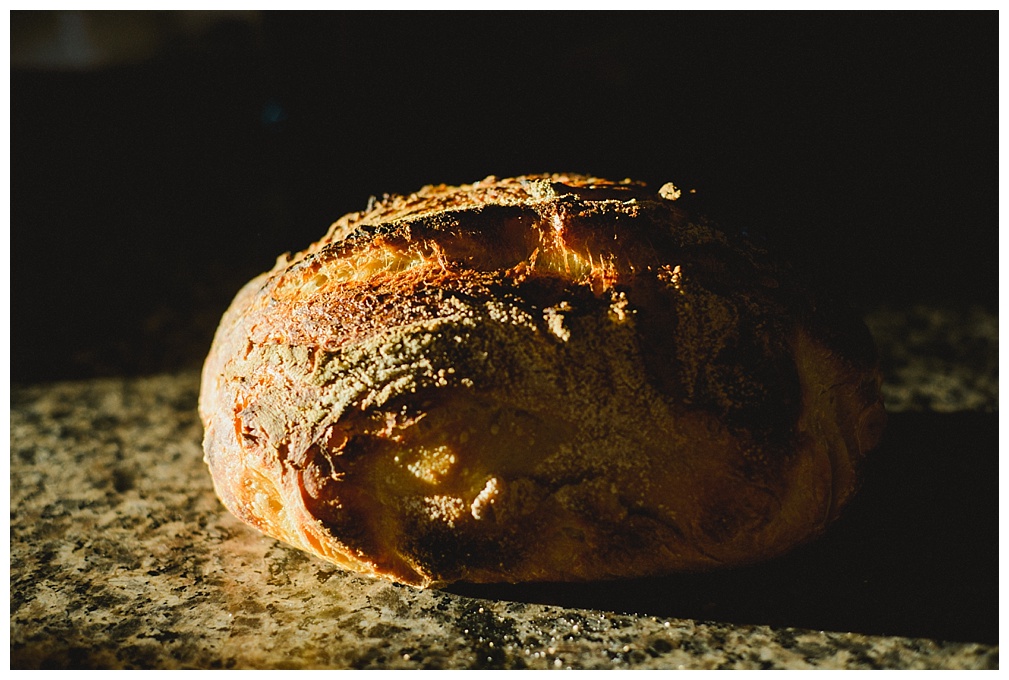 It turned out really good. I was totally proud of my bread. Which made me happy. My lovely friend Lonnie drove me up and I was very very happy to have her with me to distract me (I was getting a bit nervous the closer we got) and chat with me. When we got there at noon I sat around and waited. Then at about 1:15. Then we went into the kitchens. We had to plate the food and they took pictures of it. There was only four bakers in our group, which was way less than the earlier two groups, (both of the had 11). Me, Leslie, Kaylee and Jim. We are introduced to everyone – their team, the Judge Chef Rose. They showed us where everything was and talked about the show and the applicants.  And all of this was getting filmed. It was really relaxed and not stressful at all. Everyone was so kind and nice. 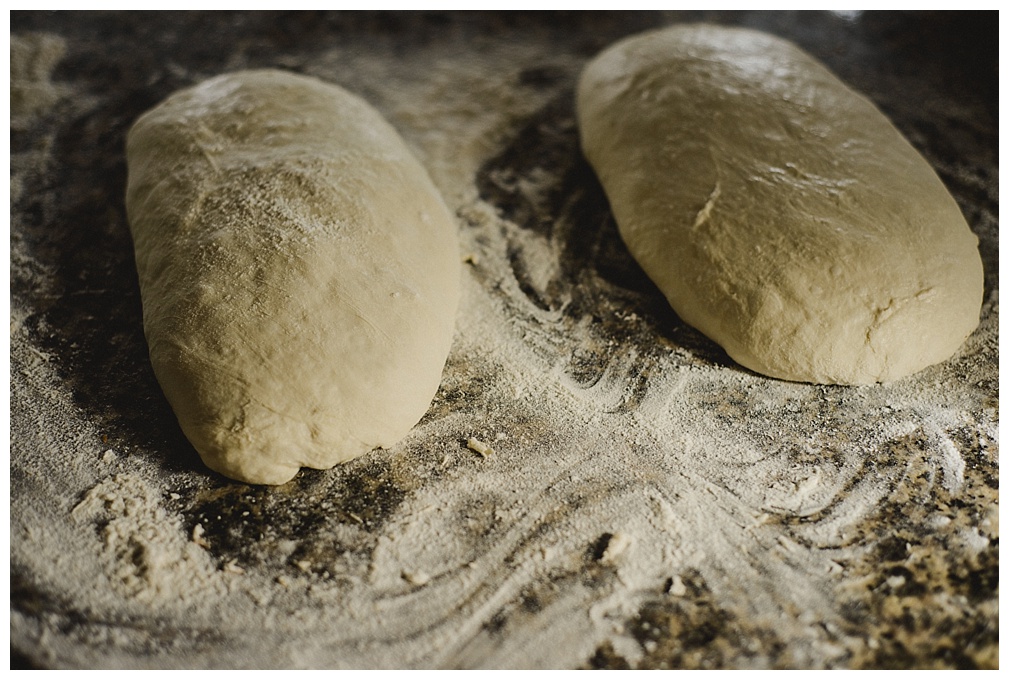 Then they did a little count down and showed us our recipes we all had to bake. It was scones, and we were supposed to flavour them any way we wanted too. I did blueberry and lemon. The filming around and in our faces quite a bit. (It was weird and I’m sure I answered them funny, haha.) 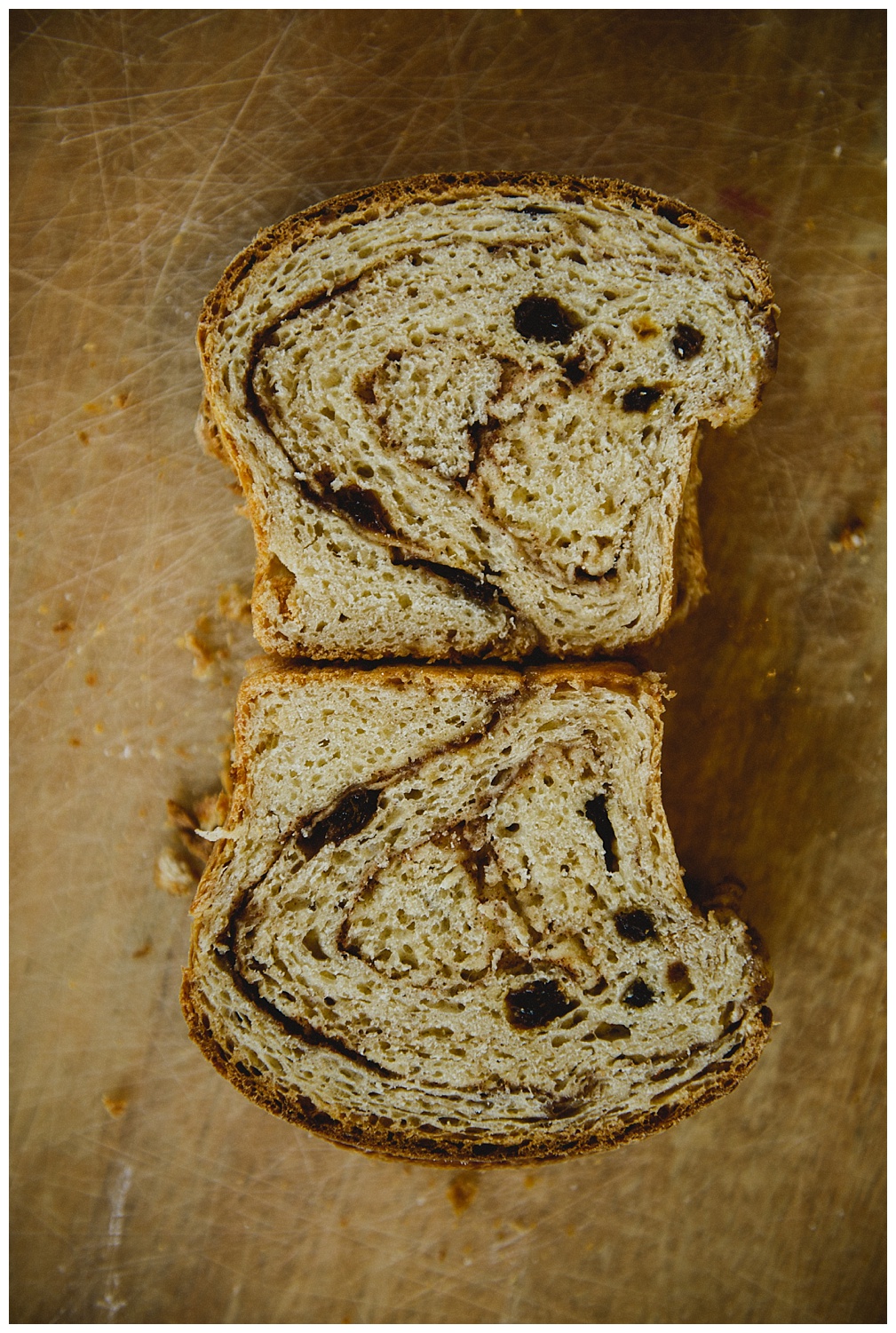 I talked a lot about my kids and how I bake for them. And I was happy to say “I’m a mom!” Then the Judge Chef, came around to each one of us to explain our dish we brought. So I talked a lot about bread and sour dough and the cycles of bread. (To my hearts content ?) then she wrote down and made notes, and tasted and told me it was really really really great bread. ? and told me that I obviously knew a lot about bread. Hahahahaha I was the only contestant from Alberta to make bread. So Im assuming it stood out. Then we all tasted each other’s. Which was awesome. Super yummy stuff. Macaroons, lemon tart and small cream cheese tarts with french meringue with blue berries on top.
Then they collected a scone from each of us. And then we waited around again and I enjoyed talking to the other contestents. Then I had my on camera interview and that was funny too. It was a total ramble, but lovely Meredith told me that was what editing was for.

I think I was myself. Jim, one of the contestants was telling me everyone needs a roll and I need to remember mine is farm girl. HA.

It was fun and I realized that I might know a lot about baking. It was a funny realization. I guess. They were talking about different doughs and stuff and how hard they were and I was thinking… it is??  So maybe that was a good outcome of the day too. 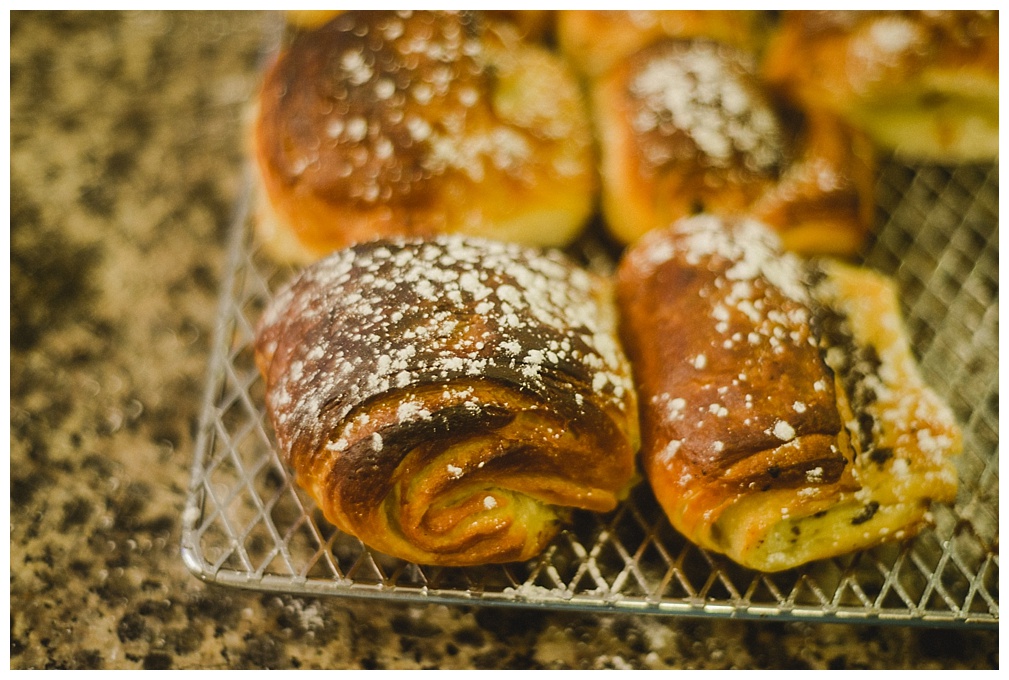 They didn’t tell me when I’ll hear anything. They still have to go to Winnipeg, Toronto, Halifax and St Johns. They did tell me they give the people who got the on camera interviews baking homework. And mine was to watch the tv show. So I’ll try and do that soon.
I have no idea if it’s going to even be realistic to go and do the rest of the show. It’ll be in Toronto. And I have 5 kids. They fly you there and they pay for your to stay. And that just seems to impractical. And I’m not sure even why I’m doing it. Except that my kids wanted me too and i love baking. I’m really passionate about it really. And I want them to see me do hard things. To try for things. Why not. I do want to keep going. It’s a bit terrifying to me to be on tv. Not really something I have ever even had in my head, EVER. But it’s a challenge and I’d love to just see how I’d do.

So it was fun and who knows where it will go from here.